“I’ve got a lot of problems with you people, and you’re going to hear about them” – Frank Costanza

So, this article will focus on my gratitude for finally (a year or two on) getting the three core Seekers in the same line/scale/deco etc -without any paint splatter or other nonsense to ruin what are superb toys. 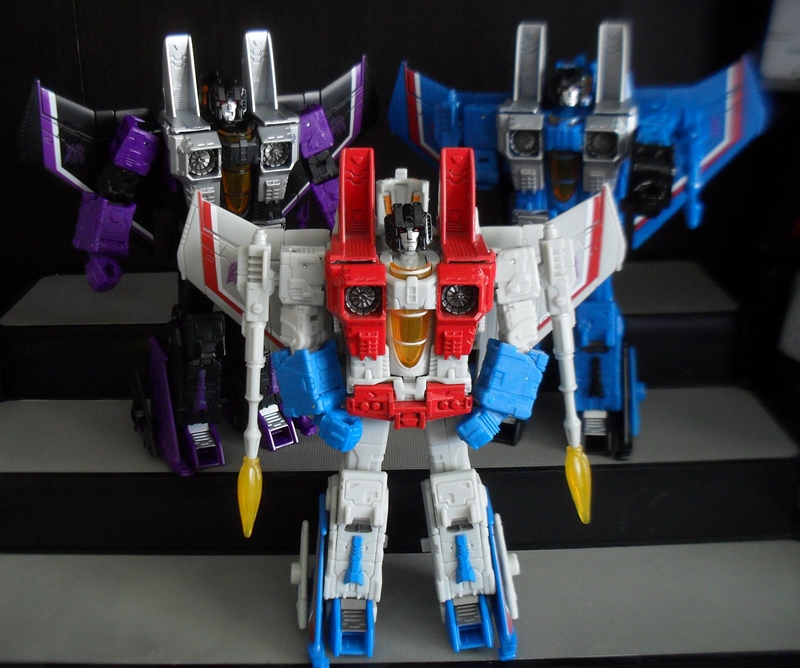 In robot mode and classic F-15 based jet mode, the toy immediately reminds you of the Generations Classics Seekers – but blown up bigger. And they are perhaps 60% similar, with the rest being new design/tooling.

The jet modes tidy up fairly well with minimum kibble and no visible “robot staring at you under a plane” that plagues many aerial Transforming robots.

The face sculpts are decent, but the mouth expressions are somewhat odd. Fortunately the heads are swappable between each other and also with the older Tetra Jet versions for some variety. 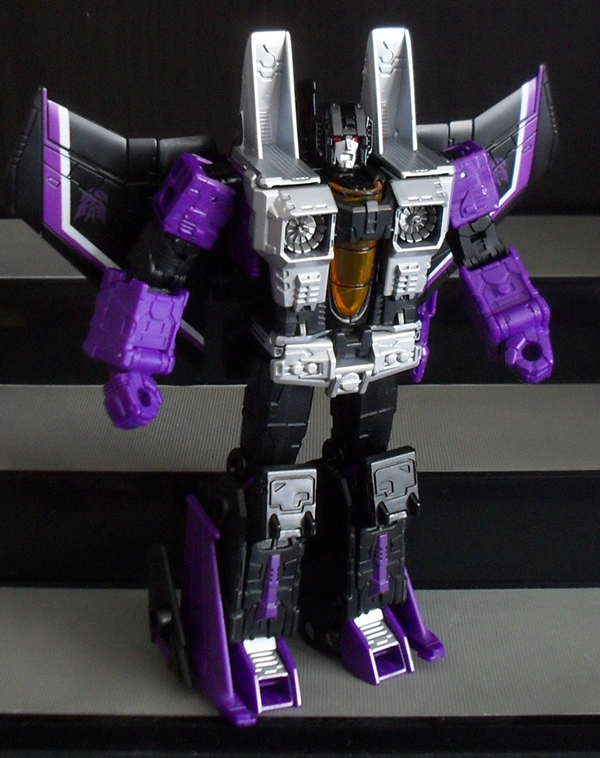 The paint deco for once looks appropriate, instead of utterly lacking. There are parts where more could have been used, but the essential colors, wing highlights and chest / air intakes are immediately striking helping to bring these iconic characters to life on the shelf.

A couple areas where the old Classics Seekers still beat them however are the over panel lines, a better looking cockpit on the plane, and the cyclindical jet exhausts on the rear of the jet that are present on both the Classics and Generation One versions, but entirely absent on these modern versions as we instead get better feet, leaving the jet modes a bit odd and likely to explode on take off.

The head shape is a bit nicer on the Earthrise Seekers, while the inner face and eyes are still more defined on the old Classics Seekers. 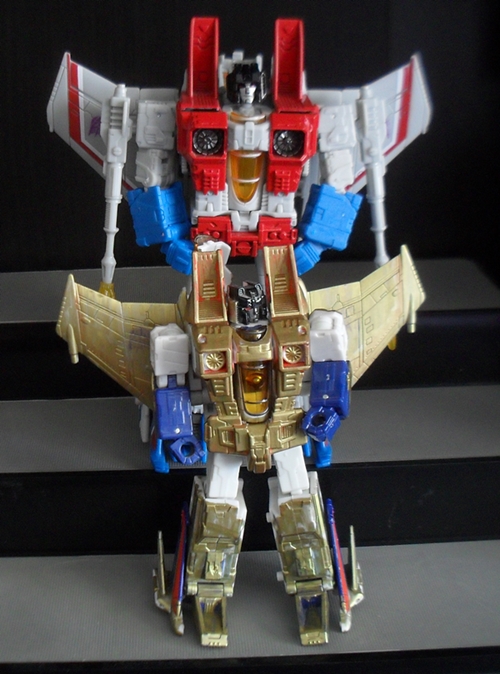 The Earthrise Seekers offer a mix of features and style from the G1, MP and old cartoon – being truly a nice a mix of each element. They are not going to compare favorably to expensive 3P Seekers, which have been refined almost to perfection by now – but for a mainline cheap Starscream, this is about the best we have seen in a decade. 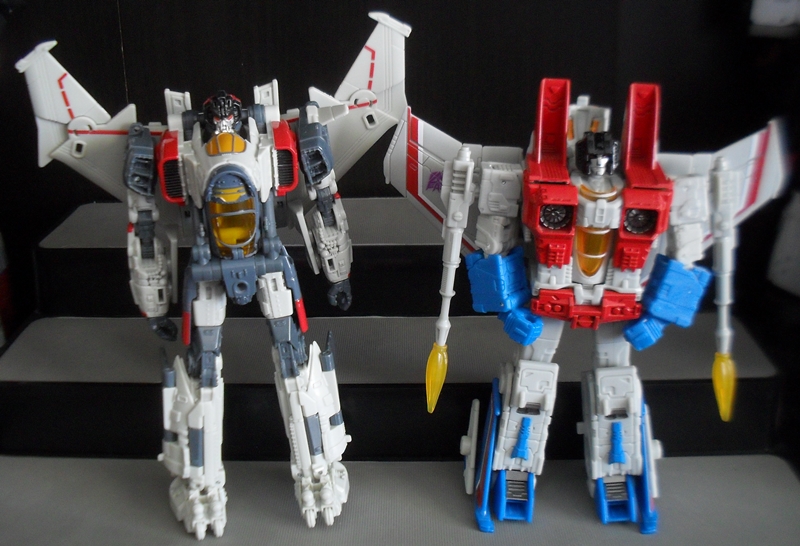 With the Siege essential three Starscream, Skywarp and Thundercracker finally together, I can look at selling the ever unpopular Tetra Jet versions. Truly nobody wants them – as for a year I had no luck nor interest in anybody buying them at cost. Hopefully next year will be different.

The robots modes of the F-15 and Tetras are similar in height while the F-15 alt mode is much longer than the Tetras, and more visually appealing to my eyes.

I don’t hate the Tetra design Seekers, the robot modes are decent, the alt mode has grown on me somewhat and they are at least fun and easy to transform.

Their design is just so in-elegant and once you add the ass uggly paint splatter all over them – is it any wonder they are worthless to try and get rid of, when you have these proper Jet beauties next to them, that everybody wanted in the first place. 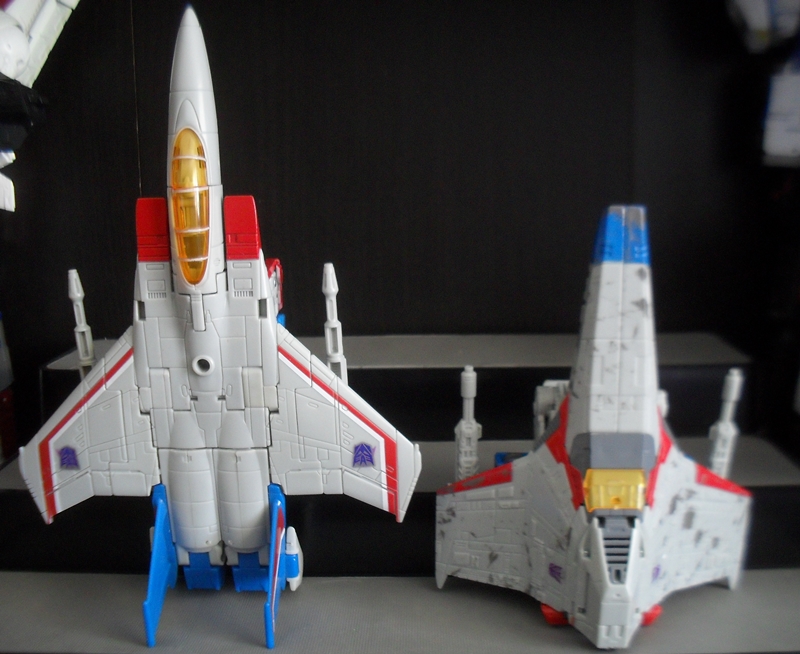 The Tetras are a fun set in their own way, a nice nod to the old cartoon pilot mini-series that kicked off the first season of the original show. Unfortunately they changed the design quite a bit from the pyramid shaped Tetra Jet into what is clearly a Battlestar Galactica inspired Colonial Viper – a plus for some, a minus for others.

The cartoon Tetra Jets – are pretty weird looking and it’s not like people were begging for ANY version of them. It is no surprise they did a redesign that is more practical to make as a toy, the design we got has the Viper square nose, and three exhausts/engines on the rear.

Kibble everywhere, completely ruining any chance of displaying them nicely in flight. They only work if you are looking down on them (not up) and who in fuck has the space to display three flying vehicles on a low shelf? And how will I even see them at knee height?

The classic Seeker design is so well established that maybe years from now the Tetras will be more of a novely toy – but they will still be a bit crap.

In robot mode they are fairly nice, you have to ignore the paint splashes everywhere to appreciate the sculpt underneath. The transparent chest cockpit stands out more than the classic version, and catches the light very well.

The wider wings and limbs give the Tetra boys a chunky intimidating appearance, which looks cool but is at odds with their core ethos of being slick lean robots and jets. The fourth Tetra I have is a made up modern character (below left, orange wing highlights), he has the best paint deco, no stupid paint splash and is the only version I will keep in my collection.

A last side by side with robot mode Skywarp Seeker and Tetra . Both are good toys, but if you have Coke, you don’t want “New Coke”. Or a can of coke rolled in dirt in the back yard.

Some other quick comparisons with a Unicron Trilogy era Seeker, a Bee Movie Studio Series Seeker mold (dubbed Blitzwing) and the old Classics Starscream that I tried to sell, nobody wanted so when bored I attacked it with a gold paint pen and never finished as the pen ran out.

Favorite head sculpt of this lot goes to the old boy in blue here, the animated style face is very nice, and the large size means you can actually see it. 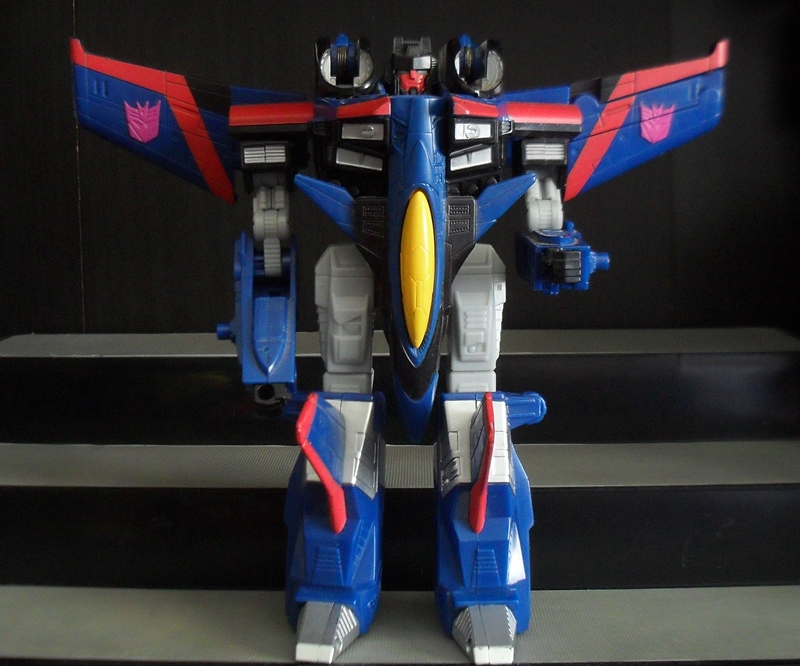 And a quick size comparison with various Seeker jets plus Scream in Jet and Tetra modes. There are several retooled versions of the Bee Movie Seekers as this point that are quite nice, but I can’t collect everything.

Next up, I better get out the Coneheads – well the two I managed to get anyhow.

So the Tetras – not awful -but quite a few big flaws. They are cool in their own way, but Hasbro really fucked over the fans by making these instead of the classic version people wanted in the new SIEGE line scale.

The F-16 classic ones – fucking exclusives! Core characters that should have been mainline and easy to buy at retail. Talk about ass backwards.

It took me perhaps two years to get the core three I wanted, as they were never sold in my home country. 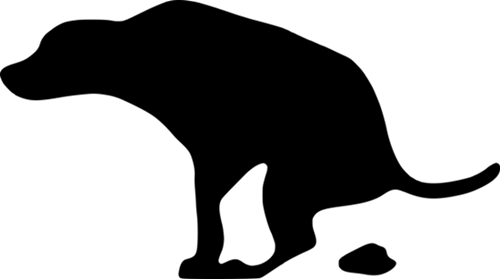 Hasbro really are fucking up on basic things like this – taking core iconic characters and making the primary deco an unavailable exclusive- it is absolute shit and I am grateful to be near the end of collecting the core Season 1 and Season 2 + 86 Movie characters. As I won’t have to put up with their shit any more, and can move on to other more enjoyable things.

The Darkest Night of All: Batman METAL and Dark Knight III